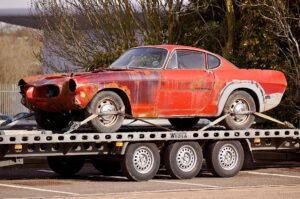 A hot topic regarding auto transport options would definitely be the use of terminals. Some people are lead to believe that shipping from terminal to terminal is a great savings. In reality it is just the opposite in most cases. Some companies will offer you terminal-to-terminal service bundled with a really low quote. Be very careful when considering this option.
Those companies often purposely neglect to reveal the hidden fees associated with terminals. They also fail to explain the risks involved. When planning your shipment we strongly advise against using terminals. Stay away from this auto transport option.

When you work with Nation Wide Discount Auto Transport you get door-to-door service ONLY. We don’t use terminals because we don’t like our customers being forced to pay hidden storage fees and other surcharges related to terminals.

There are also security issues when it comes to terminal drop-off. Many of the auto transport companies you will talk to about shipping will tell you the terminals are a good thing. In reality, that person who reassures your car will be safe has never even seen the terminal they want to drop your car at. It’s true. They have no clue what they are talking about whatsoever.

Recently we had a new customer come to us because her last car move was dropped at a terminal for pickup. She went to get her car and paid at the gate for the delivery. The auto transport company driver handed her the keys to the car and pointed to the last row in the terminal lot.

While she walked to the back of the terminal lot the transport driver quietly disappeared. She finally located her car only to discover both rear side windows were smashed out and when the thieves couldn’t climb in through them they used a crowbar to pry the rear hatch open. At that point she stepped over the broken glass and saw her new car stereo had been ripped out of the dashboard. After the initial shock wore off she quickly made her way back to the gate only to find the transport driver had already left.

If that wasn’t bad enough, the terminal gatekeeper then informed her of the 3 days storage she had to pay before her car would be released. Again she was in shock. She lost her temper and threatened legal action but the gatekeeper just pointed to the sign over the terminal entrance gate that read “Not Responsible for Vehicles Placed In Storage.”

The transport driver brought the car in through that very same gate and unloaded it inside as he was told. After all, she had agreed to using the terminal for delivery of her vehicle. She walked right into that situation because she wanted to save some money and in the end it costed her more than door-to-door delivery. There is a lesson to be learned here.

On a side note… five days after she came to us for her auto transport she received her car in a safe and timely manner and there were no terminals used in the process whatsoever.

The most important factor regarding your car being dropped at a storage terminal is no insurance coverage.

Read the FMCSA rules of transport insurance and you will find that once your car is unloaded by the auto transport (at the terminal) the insurance coverage ceases. Read more:

Moral of the story? There are auto transport options that can create huge problems and terminals top our list of options to completely avoid. Bad things DO happen at terminal locations all over the USA. The advice we give our customers is to avoid terminals completely. When you ship with Nation Wide Discount Auto Transport your car will never be dropped at a terminal, period.

Feel free to check out more info about terminals:

Auto Transport Options #2 Meeting the transport in a metro city

One great way to save some money is to meet the transport versus having them deliver it to your home. If you live in a rural area, for instance, this option works very well. If you live an hour away from Des Moines Iowa, as an example, meeting the transport in Des Moines could not only get you a transport faster but also save you money.
The transports don’t like having to drive to areas off the normal beaten path because it means once they’ve dropped your car they have to travel empty to the next pickup. If they were dropping a car in a metro area most likely there would be another car available nearby for pickup which saves them money and makes their business profitable. Make sense?

If you live in an out of the way area ask about meeting the transport. It could speed things up AND save you big money.

In your searching for a trustworthy auto transport you may come across companies that offer drive-away service. If you don’t know what that is we can explain it. A drive-away service is a company that gathers drivers and connects them with your car to actually drive the vehicle to its destination. They have been around for a long time already and some people will take the risk of using their drivers to ship a car. The problem with these type of companies is they have zero legal liabilities.
If that driver crashes your car it’s your insurance company that must pay.

The insurance company may decline paying any claims when they learn you allowed a drive-away service to operate your car, especially in a long distance moving situation.

Another factor that comes into play is that you are trusting the drive-away service to give your car to a good driver who can be fully trusted. Really, how can you check someone’s background and driving record? Our advice is to avoid the auto transport options #3. It’s really quite risky no matter what the value of your car. Even a $300 beater can cause a serious accident. One other reason to avoid this option is the mileage that will be put on your car. Lastly, you don’t know how hard the driver is on a car.

Even light driving abuse can cost expensive mechanical repairs. Just ask any mechanic. Drivers who ride the brakes cause early brake pad wear and failure. Drivers who improperly shift a car cause very expensive transmission repairs. If you aren’t riding with that driver in your car how will you know how they are treating it? Here’s a great little article that will further guide you in your decision: Is Drive Away Service Really A Good Alternative to Car Shipping?

We suggest you take a few minutes to read our auto transport quotes.

Have you been doing some reading and researching on companies?

We can’t stress this enough.

Auto Transport BBB will get you to our A+ rating on the Better Business Bureau.

This business is fantastic! My husband and I were searching for a legitimate transport service for our vehicle, since the military is relocating us. After scouring countless websites, we started looking via the BBB. Which is the best first step ever! We found this business after visiting the website, and reading through all of the extremely helpful information that was posted by them, we called and spoke with the owner, Chris. I had all of my questions answered in detail, which was amazing, being as though the other companies were just focused on telling us a price and rushing us for a decision. Not to mention many of the other companies claimed BBB accreditation and were no where to be found via the BBB sites! You will definitely get honest answers, detailed assistance, and fast callbacks and/or email replies from Chris. He was,very patient with my many questions, and so very pleasant. I also must add that the price quotes were fair, not at all hiked up, and he even went out of his way to let us know that he would still look for even lower prices closer to the time that we needed the transport! He is BBB accredited, and we also did our own FMCSA checks and background checks, etc. This business is definitely legitimate and we DEFINITELY RECOMMEND IT! We will be using his services for any future transport needs for sure!!